How do we plan our way from A to B? Imagine you are planning your way home from your favorite café. You need to know both the location of the café and your home as well as the direction between them to find the best route. Imagining what you will see when exiting the café allows you to determine whether to turn left or right. Our new paper, published in eLife, shows that representations of facing direction and grid-cell computations play a role in mental simulation in service of navigational planning.

Theoretical accounts assume that spatially tuned cells, such as place, grid and head direction cells, which were discovered in research with rats, not only allow the brain to navigate between different locations, but also underlie our capacity to imagine events. To investigate this question we built Donderstown, a virtual reality city that study participants navigated. Jacob, the first author of the study, explains: ‘In previous studies, Christian showed that movement in a virtual environment activates the brain’s navigation system. He observed patterns probably going back to grid cells and head direction cells, which are important for navigation. Now we wanted to take it a step further by testing if imagining view directions in a lifelike virtual environment, without imagining movement, also activates these spatial representations. And it did!’

The results are evidence for the idea that the brain’s navigation system also plays a role in our capacity to imagine future events and construct them in our mind. ‘Grid cells encode your location in the world and are thought to be able to calculate the vector from that location to another’, says Jacob. ‘They help us to move around, in real life but also in imagination.’ 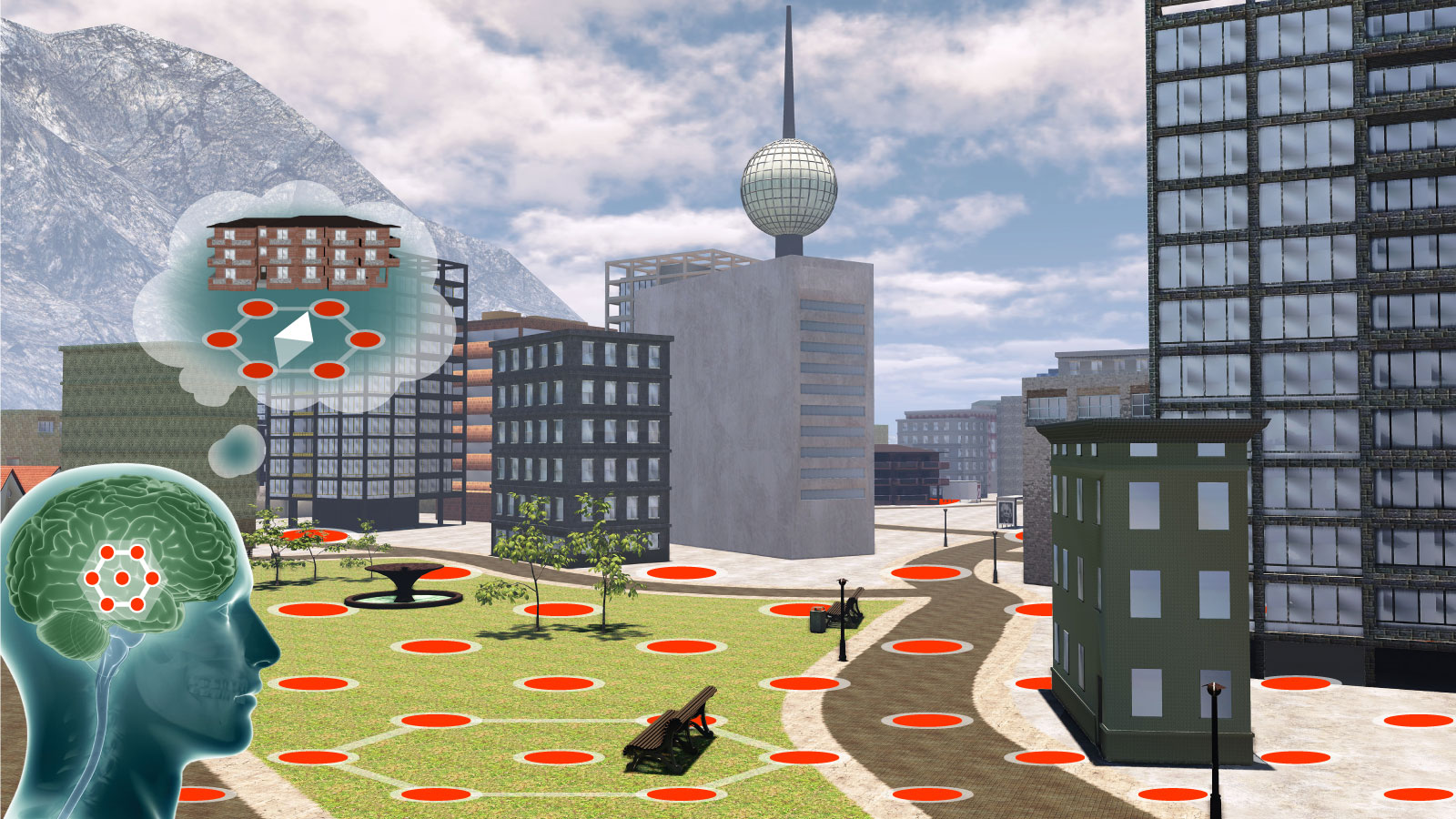 Participants imagined views facing different directions from positions in Donderstown while in the fMRI scanner. Specific patterns of brain activity indicated that the head direction and grid cell system were active during this task. The red pattern illustrates how the firing pattern of a grid cell might look like in Donderstown.

He explains the study set-up: ‘First, participants had to study Donderstown for two days, on a regular computer. They learned the names, appearances and exact locations of eighteen buildings in the town and were tested repeatedly to check if they remembered correctly. After this training, they had to imagine view directions in Donderstown while lying in the fMRI scanner.’ Similar to the café-example above, participants were asked to imagine what they would see when standing in front of one building, and looking in the direction of a second building (see figure).

When comparing patterns of brain activity during the imagination task, we detected representations of the imagined directions in the parahippocampal gyrus. Activity patterns in this brain region were most similar when a participant imagined the same direction. Furthermore, activity patterns in a brain region called entorhinal cortex, where grid cells are typically recorded in studies with rats, indicated that the grid cell system was also active while participants were imagining these views. Here, we observed that brain patterns were most similar when participants imagined views facing directions different by 60° (or multiples of 60°). This might reflect the activity of grid cells, which are characterized by their six-fold symmetric firing patterns.

‘We are very excited about these results because they speak to the idea that the brain’s spatial navigation system is also important for our imagination and the retrieval of memories’, says Christian. ‘It is the first paper to show that spatially tuned cells are also active when we imagine ourselves being in a certain place, without moving.’